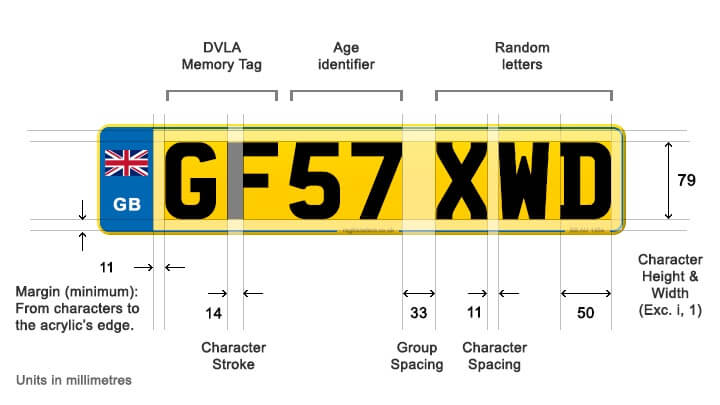 Private number plates can be a thrilling addition to your vehicle. Nevertheless, it would help if you took extra precautions to secure and display them responsibly. After all, personalized number plates are becoming much more popular in the UK and now represent a £2 billion industry here. Some people are so confident in these additions that they’ll spend £518,000 on them. You don’t need to spend that much if you’re interested in them too, and it’s important not to get overly excited. The process must be handled properly.

We’ve briefly mentioned a handful of the rules around private number plates before. However, it’s worth exploring this subject in greater detail. That way, if you’re considering enjoying this part of car customization yourself, you can ensure you’re doing so in a legally compliant manner.

Read on for your detailed guide to the rules around private number plates.

Many entities out there will claim to sell private number plates. Not all of them are legitimate services, so it’s important not to be overly trusting of low prices and flashy advertisements.

Suppliers of private number plates must be registered. They will also have procedures to follow in the sale and won’t just ship or pass you the numberplate you’ve chosen on a whim. For example, they will also:

It’s easy to find a trustworthy private number plate supplier today. Regtransfers is the UK’s largest and most prolific provider, with a 40-year track record in the industry and a second-to-none reputation. They are rated a full five stars on Trustpilot, making securing your dream number plate safe and straightforward. If you ever want to sell your private number plate one day, they can help you with that, too, so you can circle back to these top-tier services when you need to.

You can’t put whatever you want on a private number plate if your ideas breach the DVLA’s standards. Therefore, you should try to review what type of display choices are valid.

First, try to understand why these measures are in place. While you might feel like your fun is being ruined, a rational sense of perspective can help you temper those feelings. These rules are in effect so that some consistency is established with private number plates. It helps police officers identify vehicles more easily and can directly counter car theft offenses. Consequently, these choices are made to protect you and other road users, and it’s in your best interests to comply on that basis too.

According to the DVLA, there are four main rules around private number plate displays that you should follow. They include:

If you’re working with a reputable supplier, they won’t let you break away from these norms. However, if you find yourself with a provider that is omitting these details, it’s a clear indicator that you need to take your search for a private number place somewhere else.

Once you understand general display requirements on private number plates, you must regard the finer details more closely. Formatting procedures have a few nuances that must be followed.

All private number plates must have numbers and letters in a certain sequence. Since 2001, the current style has been two letters, two numbers, then a space, followed by three other letters.

The first two letters are a DVLA memory tag that references the region the vehicle was registered in. The first letter represents the local area, while the second refers to the DVLA office in that area. It’s recommended that you investigate all their meanings further if you’re interested.

The two numbers reflect the vehicle’s age. The last three letters are selected randomly, giving you some flexibility to customize how you see fit. Your private number plate cannot consist of words, though numbers can be used to substitute certain letters creatively. No private number plate should either feature irregular spacing or fonts such as italics. Making your car appear younger than it is also illegal.

Other private number plates are formatted differently and provide creative flexibility. These include suffix, prefix, and dateless styles. The latter is the most popular style as they can legally mask the age of a vehicle, but they are the costliest.

Research What Stylish Changes You Can Make

Private number plates have perhaps become a touch more formal through the years. There are an increasing number of restrictions in place in general. That said, you can make bolder changes that might communicate the louder side of your personality.

For example, you can display flags on your private number plate if you feel a great sense of national pride. You can legally display the union jack, St Andrew and St George crosses, or the red dragon of Wales. You will need to display a GB sticker when driving abroad, though, should you feature these flags.

Moreover, non-reflective borders can also feature on your private number plate. Take care to ensure they don’t interfere with the numbers or lettering, but beyond that, you have a few creative options to explore here too.

There’s a lot about private number plates that can seem quite procedural. It might even be a bit of a shock to the system if you expect a fun time where your creativity knows no limits. Remember that though there are rules to follow, there is some room for your personality to shine through with your vehicle.

While having a private number plate can be exciting, it’s worth keeping your eye on how these rules and regulations are changing over the years. After all, adjustments are occasionally being made.

For example, number plates can now only display solid black lettering as two-tone plates used to create a 3D or 4D effect have been recently banned despite other recently published private number plate guides stating otherwise. The number plates must also include the supplier and manufacturer’s business name, postcode, and the new standard. Therefore, while you might have wild and creative ideas in mind, it’s worth keeping them in check by reviewing the most recent regulatory changes.

After all, though private number plates are wonderful reflections of your character, people change through the years. Because of that, it’s reasonable to assume you may also want to change your private number plate over time. When that times, you need to be mindful of all the lawful changes that have been brought in, so keep tabs on the situation.

While there are rules to follow when it comes to private number plates, you should also take care to nurture an open mind throughout the process. Your trusted supplier should ensure you’re on the right track and gladly answer any questions you might have, so consult them if you need to. Still, remembering these rules yourself is important to having peace of mind on the roads.