Bling Baba Gurmeet Ram Rahim Singh who never misses out on a chance to paint the town in multicoloured hues easily stands out from the crowd with his eccentric dressing style. He has been under the glare with rape accusations and court rulings ordering him to 20 years of jail. Whatever be the fact we cannot ignore that the man did have some solid guts. It really is not easy to face the camera dressed in a manner which attracted much criticism and eventually ended up being the nation’s laughing stock. From a perfectly bulgy physique to hairy limbs, this self-proclaimed godman is trying hard to usher back the retrosexual era back into the Indian film industry. Below we present to you some of the most weird outfits and accessories sported by him in public appearances, movie screenings and even while donning the role of Messenger of God. Each outfit is so bad that it actually feels refreshing to see them as in a wold of polished and well-dressed celebs we seldom get to see such circus jokers. Is it a salwar? Is it a gown? Well we are just as confused as you are. With a pinch of flower power cap with bling accessories enough to cause an incurable eye sore, the Rockstar baba tries hard to be a fashion trendsetter only to create a big faux pass. Black velvet never fails to perk up the X-factor. But with our self-styled Baba, even the tried and tested combos seem to fail. Coloured trousers have often been sported by androgynous heroes with much sass but the baby pink coloured pair just increases the gross level of this frame. Coming to the boots we are confused where on earth did he manage to find something like this. This clip is from a video where Baba Ram Rahim can be seen propagating anti-tobacco agenda. But we guess his style sense caused more harm to the fashion world than tobacco ever did to our lungs! Saluting national heroes is one of the very few good things this hypocrite rapist did in his life. But what’s with that tomato coloured outfit with semi-circle balls all around? And how can we miss the star designs in his shimmery trousers and matching boots which can even give the meat clad Lady Gaga a run for her money. Guess that’s exactly what the man holding the flower thaali seems to be thinking as he looks flabbergasted with Gurmeet Sing’s atrocious outfit. 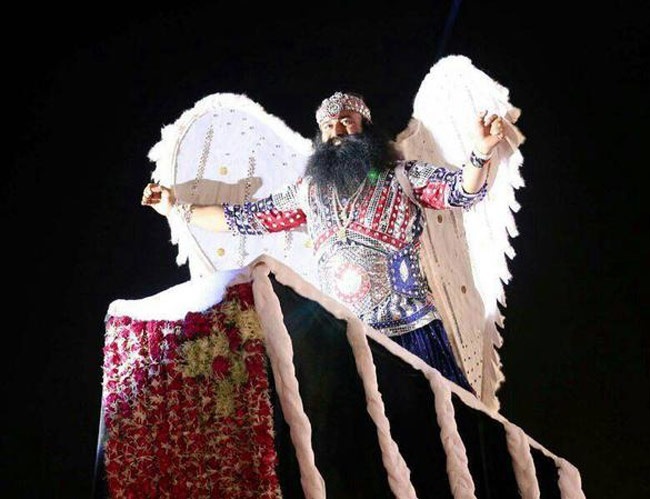 Angels come in dreams they say. But no one ever warned us that angles are so hairy and bulky. We would rather be happier facing demons than have angles flying around our bedroom in such grotesque outfits at night! Save apart the baby pink wings everything about his outfit is bizarre whether it’s his headgear or his over embellished shirt.

Boys wearing capris can look exceptionally cool. But when the Capri comes with patterned cuts around the kneecap and multicoloured patterns around the thigh area, it looks anything but cool. It’s a fashion disaster. In case you didn’t notice the weird fishes hanging from his shirt sleeves or his fish shaped pockets, then we would be delighted to bring the same to your attention. With Diwali just a few months to go, this pataka outfit is worth a try, what say? 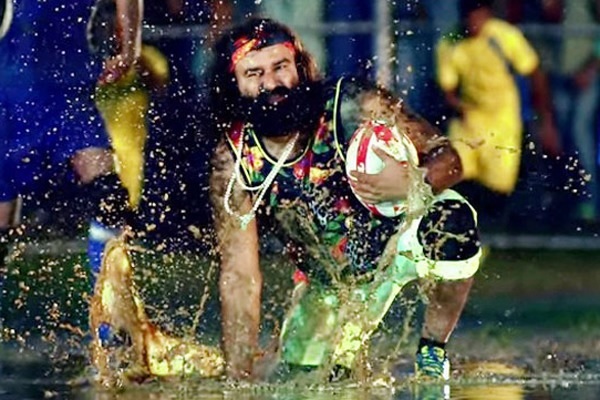 Baba letting his hair down is the virtual reality of a wild beast thumping around the town. But in this case the beast was in a playful mood. Hence the rugby ball in one hand and floral outfit to fit the mood. Fluorescent shoes and fiery coloured bandana would have looked good on a swanky teen but when it’s the infamous Baba, even the ultra-sexy tuxedo can look like a fool’s paradise. 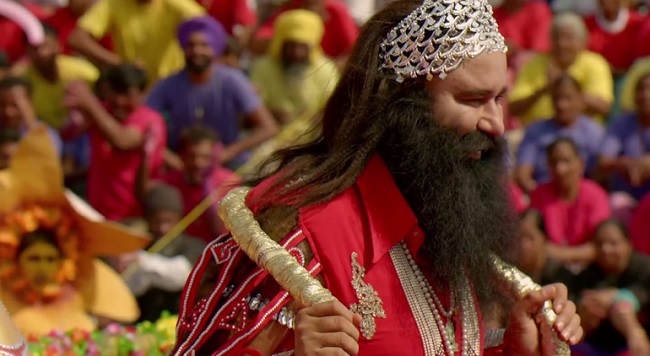 Pretty girls wearing bling headgears are oh-so-cute. But when it’s the super hairy brand endorser of Head and Shoulders (just kidding) the overall frame becomes tacky to the core. Even the classy pearl strands lose their elegance as the flimsy collared shirt with side cuts imparts a cheap look to this movie scene.

8. Ram Rahim In Multi Color Out Fit With Golden Jewellery 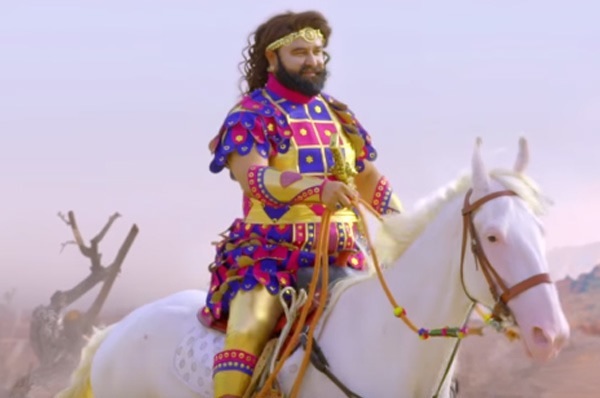 Didn’t we all grow up listen to urban legends of a Prince charming arriving in a milky white horse? Well Gurmeet Singh is nothing close to that. Rather he is that villain who loves to wear the most weird outfits to attract the camera glare. He oddly reminds us of Flintstones, but at least the cartoon character was adorable unlike him! The checkboard pattered top with layered sleeves is what our worst nightmare are made up of. And the golden shimmery leggings, well let’s just say it’s like a nail on the coffin.

We hope you liked our collection of the catastrophe dressing styles. In case if you have some up your sleeves we would love to see them too. As Baba rots in jail let us have fun laughing over the epic instances when he literally murdered fashion bare-handed.