Cruising around at night might seem like a tempting choice until the headlights from the upcoming vehicles bedazzle you. Be it main beams that haven’t been switched off, LED headlights, or bright xenon lights, the dazzling effect can temporarily blind you as your eyes readjust to the darkness beyond. This is where the night driving glasses come in to reduce the effects of glare and add to the level of road safety.

What are night driving glasses?

Night driving glasses are non-prescription glasses having yellow-tinted lenses ranging in shades from light yellow to amber. Adding color to white light makes it easier on the eye and the unique thing about yellow hue is that it can reduce this without altering the overall color spectrum severely that the eye will be seeing at night. Using other colors like red, blue, or green might be very distracting.

The night driving glasses follow the same principle as sports eyeglasses. Typically, they include an anti-reflective coating that blocks out light reflections from different sources like headlights or streetlights which might cause glare. Originally, these glasses were promoted to hunters as shooting glasses and claimed to sharpen the contrast of a bird flying in the sky even in overcast or cloudy conditions.

Often the night driving glasses are accompanied by an anti-reflective coating to eliminate internal reflections of light from headlights and streetlights. They can reduce glare by filtering out and scattering blue light. It is imperative to note here that blue light refers to the part of the light spectrum having the largest amount of energy and the shortest wavelength. Blue light has a greater chance of causing glare on entering the eye compared to other types of lights with longer wavelengths.

Years of research have revealed that yellow-tinted lenses enhance the contrast level during daylight scenarios. Though they can block blue light, they also decrease the amount of light entering our eyes which can reduce visibility in low-light conditions at night. This makes them detrimental rather than helpful at night. You can get night driving glasses in a variety of shades of yellow and amber. Getting the darkest lenses will filter out the most glare but also impair the largest amount of light from passing through thus making it hard to see in dark conditions.

Several wearers of night driving glasses have reported that they are better able to see at night wearing them. However, visual tests have an entirely different story to tell. According to the test results, the night driving glasses aren’t of any help for drivers to see pedestrians any faster than they would without them. A small study conducted in 2019 revealed that night driving glasses can slow down visual reflexes by a fraction of a second making night vision slightly worse.

Sellers of night driving glasses boast about their effectiveness in reducing dazzle and glare at night. You might even feel the difference for yourself if your eyes are photosensitive. However, there isn’t any scientific backing behind the same. In reality, yellow-tinted glasses are better for dealing with hazy or foggy conditions rather than for combating headlight glare. You should primarily schedule an appointment with an optometric if you are particularly susceptible to headlight glare. Getting these glasses can be of help if you buy a pair having an anti-reflective coating as they will enhance your eye’s ability to cope with the glare and reduce reflections created from the lenses themselves.

Can you wear sunglasses while driving at night?

Sunglasses including the ones having mirrored lenses diminish the amount of light coming into the eye just like night driving glasses. This makes them inappropriate and also dangerous for night driving. 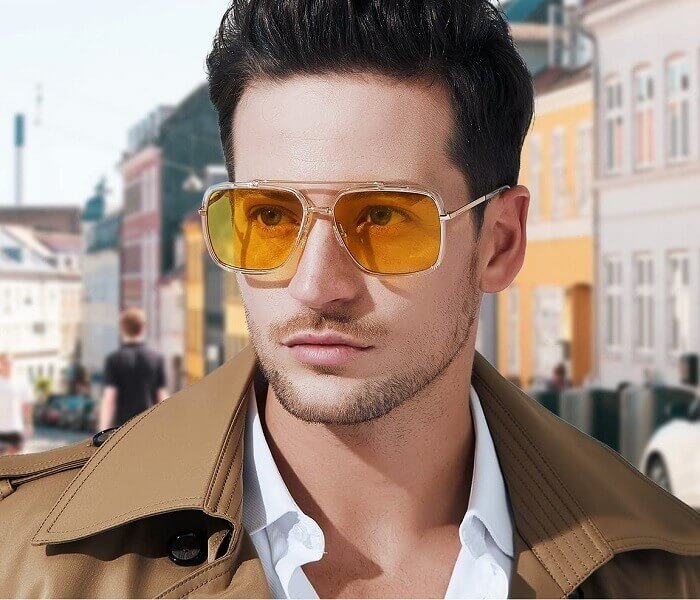 Choosing glasses having an anti-reflective coating helps reduce nearsightedness, farsightedness, or astigmatism at night. These glasses help drivers have the best vision by allowing almost 100% of light to enter their eyes.

There are two variants of night vision technology: infrared night vision producing green images as shown in movies and thermal imaging night vision. Infrared night vision works only in low light conditions and isn’t well suited for complete darkness. These goggles won’t be able to produce any image at all if there isn’t any light source nearby. In case of excess brightness, the light can damage your goggles beyond repair. Next comes thermal night vision goggles which produce electronic images depending on temperature differences. Since they bank on the use of temperature detection and heat rather than light, the images aren’t as clear as infrared goggles but are satisfactory even in complete darkness. If you are searching for night vision goggles that will help you see even when it’s pitch black, then you need to get thermal imaging night vision glasses.

Blue light-blocking glasses for night driving having an orange or red tint reduce the amount of green or blue light entering our eyes and causing glare. However, this also lowers the total light entering our eyes leading to dangerous results. Various drivers have claimed that the reduction in headlight glare helps them see better during rainy days. However, medical tests do not conform to the same. Another safety concern arises from the fact that the red/orange tinted blue light-blocking glasses meant for night driving remove all green and blue light at night which induces the release of the sleep hormone melatonin. A heightened level of melatonin promotes a higher level of sleepiness for the driver and poses big safety threats. The spectrum of blue-light ranges from 400 to 500 nanometers. Often goggle manufacturers reduce the effectiveness of the glasses at a particular range of wavelengths. This keeps the wearer unprotected from the peak blue light wavelength of 455 nanometers. While buying blue-light blocking glasses, you should primarily ensure that they filter light across the entire blue light spectrum while filtering out 50% of blue light at 455nm. Going for anything else won’t be of much help as you drive around at night.

Driving through the night or dusk can be pretty stressful. It gets really difficult to see around at night coupled with poor night vision and a lowered amount of light. An impaired vision can diminish your and others’ safety on the road. Night driving glasses seek to solve this problem with their yellow tint that reduces the brightness of white light or with polarized lenses that reduce reflections.