No matter, how traditional and conservative Bollywood may seem, it did manage to break some major grounds over years. Coming out of the ghungaat was no easy feat. The symbol of Indian woman – the bharatiya nari – was the ghungaat. So when the Bollywood actresses stepped out of it, the social shock was magnanimous. The two piece bomb attracted numerous controversies right from the beginning due to its challenging of traditional Indian mindset, inspiring girls to obtain the size zero body and objectifying women as a sex object.

Bikini has surely come a long way starting from the time when parents shied away from taking children to movies showing bikini clad actresses to modern times when it has become the blood and bone of masala movies.

Here are some of the Bollywood films that dared to venture and made Bikini a trend of the season:

1. Welcoming the bikini on a romantic Evening in Paris during the sensuous sixties! 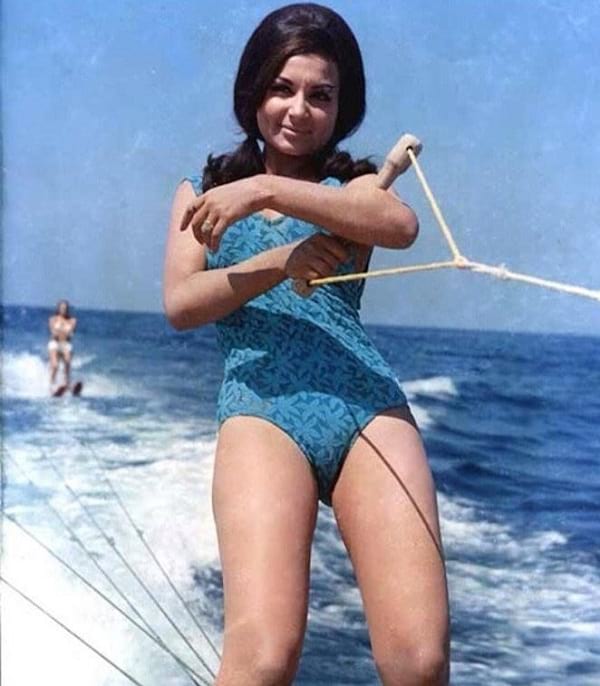 There was never an explosion greater than in 1967, when Sharmila Tagore appeared on-screen wearing a blue monokini, cruising the French Riviera. Shakti Samanta’s An Evening in Paris was a masterpiece in itself. But what made people flock to the theatre was to get a glimpse of an unprecedented event in Indian Cinema heralding the grand welcome of bikini into Indian silver screen. The film did manage to sediment Tagore’s place in the history of Bollywood.

However, it was not over, the effervescent Bengali beauty was adamant on breaking more walls and she couldn’t have done it better than by posing in a two-piece bikini for a Filmfare shoot, the same year. The bouffant hair, the winged eyeliner and the floral bikini, it was so 60s, yet it was timeless, because it was creating history, and what a history it was!

2. Bringing out all the hidden Heera Panna during the enigmatic eighties! Well, if you think of two words, bold & beautiful, the only Bollywood actress that will appear in your mind is Zeenat Aman. When you own a figure like Zeenie baby, it’s actually a crime to cover it. The former Miss India and Miss Asia Pacific stunned everyone by slipping into a two-piece floral bikini in the film Heera Panna. She was the face of 80’s, the decade when Bollywood was adapting to the changing world, and no one could have acted as a better catalyst except her. As India’s first sex symbol she immortalized the two pieces for future actresses to take a cue from.

3. Birth of the Bikini Babe of Bollywood in the 70’s megamovie! 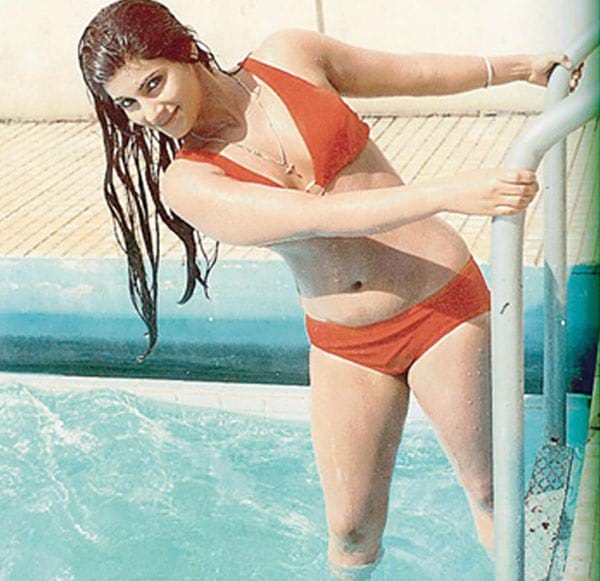 Dimple Kapadia was just 16 when she starred in Bobby. Raj Kapoor, who directed the film, never shied away from bold endeavors. He didn’t in this film either. The red bikini is still considered a great fashion moment in Bollywood along with the film’s famous “bobby-prints”. The seductress soon got the title of being the Bikini babe of Bollywood and gave a big jolt to our conservative mindset. Haters continued with their anti-dimple propaganda, but Dimple’s acting skills and her bikini stunts catapulted her sure shot success.

4. The Sharmilee ladies dropping the bikini bomb and causing furore during the eighties! 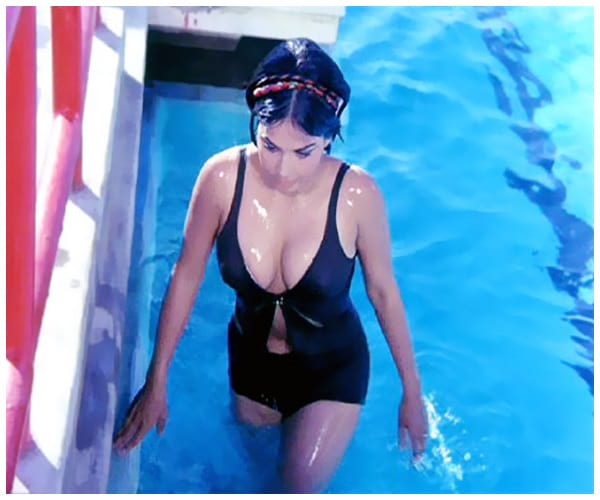 You know how to make something controversial mainstream? Make the least controversial people use it. The otherwise demure Rakhee prancing around in a cleavage showing navel exposing black bikini in Sharmilee came as a shock to many. Her act changed the damsel in distress tag of Bollywood heroines to the sexy, smart and independent modern lady.

5. Yeh Nazdeekiyaan with your beloved called for the sheer bikini show during the eighties! If Zeenat Aman was known for her boldness, then Parveen Babi was the epitome of confidence which oozed out in this 1982 film blockbuster. The sheerness of the black bikini raised many an eyebrows, but who cares when you are about to become one of the greatest actress of Bollywood. Her killer combo of slow-mo running and voluptuous curves looked like a dream on screen.

6. Gen-Y getting into the Rangeela mood during the nineties! 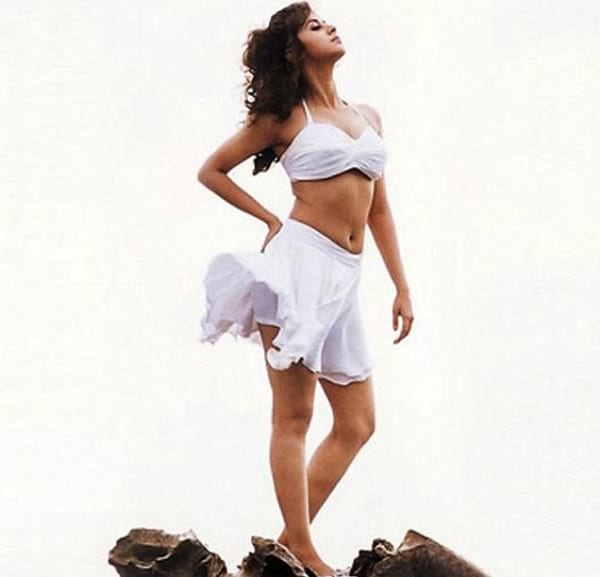 It was the 90’s and a new generation had emerged. A generation soaked in the impressive western cultures and fashion. That’s exactly when Urmila pumped up her oomph factor with Rangeela which did set some serious fashion trends. The short dresses, the thigh-high slit gown and the bikinis! If you remember the amazing Tanha Tanha song, then you must remember the bikinis that she wore. From the white bikini with a micro skirt to the black monokini to the floral printed two-piece, it was a sensation and it still is.

7. ‘Murder’ing us with her hourglass figures and ample skin show in the 2004 sleeper hit marking the beginning of Bikini season! Now, if Mallika Sherawat is good at anything then its making headlines. And oh boy she did that so well with her too hot to handle film Murder, where she exploded her glowing sexiness in a turquoise blue bikini. The film made Mallika Sherawat a house hold name in India cinema, and all the credit must go to the ample lip locks and bikini scene in the film. And the sheer blue sarong wrapped along Mallika’s bootilicious waist added to her oozing sex appeal.

8. Marking an era of Dostana between Priyanka and the cool blue Miami beach! 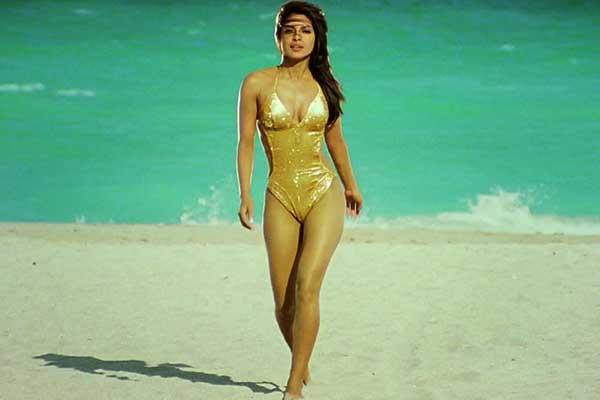 In recent times, if there is anyone who was able to make bikini a mainstream swimwear, then it is Priyanka Chopra. Her golden bikini in Dostana had everything that a modern woman needs. The cut, the fabric the whole structure, just oozed with confidence. Priyanka scorched the screen in a golden flashy swimsuit which accentuated her killer curves.

9. Serving us with the perfect Cocktail of boldness and enigma in the new millennial!

Cocktail chiseled two things on the stone – Deepika’s acting chops and her neon red bikini. Ah! What a color, what a figure, what a shot, what everything! When she rolled on the pristine beach wearing the teeny tiny two piece we could hardly blink our eyes. She even added weight in the right places to sizzle the screen with her sexy avatar. This was the first time when the charming actress donned a two piece for the silver screen although she did plenty bikini shootings during her modeling days as a Kingfisher calendar girl.