Bollywood’s style goddess Sonam Kapoor’s unconventional fashion sense is greatly jabbered in the fashion world. She has set an inspiration and pioneered the world of fashion. Sonam has dazed us each time she has garbed a saree. This fashion icon has been styling sarees in perfect Indo-western fusion and celebrating the cult of saree in the western world too!

Sonam is blessed with an agile body and great height. She knows to carry her outfits naturally in a stylish way. Whether it falls in Indian ethnic or western genre, she always stands out with her promising picks.

Sonam Kapoor has made more headlines for her bestiary style rather than her acting skills. This damsel has always managed to showcase her best looks out of her Pandora box with her experimental and personalized add-ons. The diva’s body language, attitude and right make-up have made her a favorite amongst Anamika Khanna, Eli Saab, Payal Singhal and other ace fashion designers. Blessed with an inherent sense of style from her mother, Sonam balances her elegance with her the chicest of accessories and keeps them simple as she wears a heavy saree or blouse.

Read more to know about Sonam’s stunning sarees and how she has fusioned Indo-western style of wearing sarees with her stylish elements and edgy drapes.

1. Dhoti Drape Spruced up with a sheer cape Sonam Kapoor was showered with accolades at the Cannes Film Festival in the year 2014 as she flaunted a pastel sheer Anamika Khanna saree. She gave a whole new twist to the outfit with a dhoti drape and a sensuous sheer cape. Always a trendsetter, Sonam stole all the attention with the choker she wore, designed by her mother Sunita Kapoor.

2. Layering up the Saree with Jacket Sonam Kapoor made an instant statement in Anamika Khanna’s gauzy lace saree and a stylish embellished blouse. The blouse, extended with a cape, looked utterly gorgeous and royal.

Sonam chose to adore a single pearl Nathni with her royal attire. The embellished jacket cape made her look simply magnificent. Her prominent nose ring and winged eyeliner created the concoction of bold and conventional.

Sonam went plain yet elegant with a beautiful saree on the talk show ‘Front Row With Anupama Chopra’. The saree was launched by Payal Singhal at LFW Winter Festive Collection. The bollywood damsel chose a single shoulder blouse with heavy floral pattern embroidery. She completed her look with silver earrings from ‘House of Chic’ and a gorgeous. The blouse was the epitome of this Indo-western look and added extreme glamour to Sonam’s simple elegant saree on the show.

4. Simple and chic with Shirt Blouse 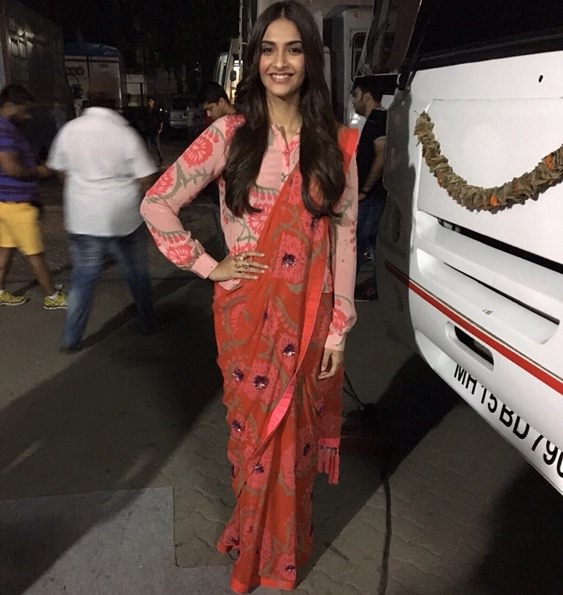 Sonam Kapoor has literally illustrated the world how to wear a shirt with sarees! The style goddess has always been different in her style and we have seen her hitting it out at the Park, Mumbai, during the Prem Ratan Dhan Payo promotions.

Who said shirt-blouses are boring? Sonam looked absolutely gorgeous in Anupamaa Dayal’s colorful and vibrant silhouette designs. The soft makeup by Namrata Soni and Arti Nayar added further to the look. Sonam Kapoor‘s desi streak with western twists have never failed to win the heart of her followers. Sonam has taken the responsibility of making desi the flavor of the global fashion. Her western fusions with the saree have been outstanding. Sonam has been really lucky to get designs by Abu Jani Sandeep Khosla, who gives Sonam all newfangled looks in her sarees. The fashionista wore a powder blue double palla saree by Abu Jani Sandeep Khosla during the promotions of Neerja, and left everyone awestruck. She looked absolutely graceful and made an exceptional statement with her drapes. We went mouth-gaped when we saw Sonam in a full length jacket over a saree! The outfit created by Rahul Mishra Couture is not easy to pull off. Sonam Kapoor carried this look effortlessly, leaving style freaks looking upto trying it on. She made a total justice to the attire by styling the saree and jacket with her jhumka and gorgeous finger ring. 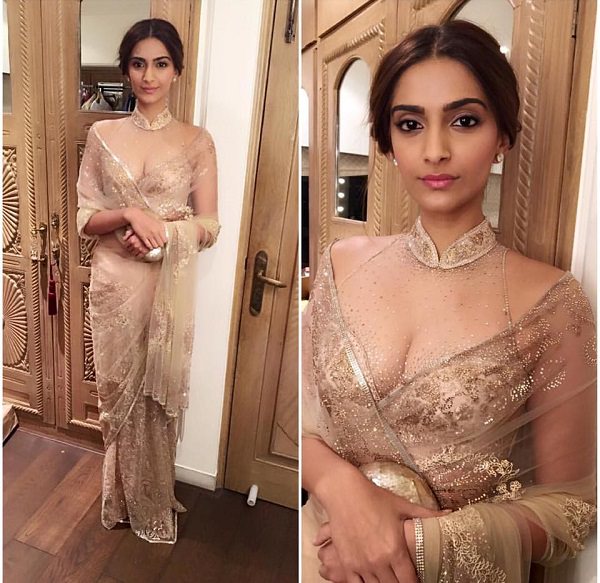 As if the saree itself was less sensuous, Sonam put on this sheer heavily embroidered saree with an even revealing blouse taking the Indian attire to a whole new level. She was seen in this ravishing piece at a Diwali Bash during her promotional events for PRDP. The Tarun Tahiliani designer definitely needs some guts to pull off.

Recommended Read: How to (or Not to) wear a Saree? Tips and Tricks One of our favourite looks is when Sonam picked up a plain beige saree from a casual wardobe and added a whole new definition to her drape with a chic blouse. WIth a front zip embroidered blouse that looks pep and classy, Sonam has given us a tutorial on how plain hues cannot be take for granted. This year, Sonam Kapoor walked in an irresistible black and blue saree bringing in indian fashion designer Rimzim Dadu at Cannes. Media and her fans instantly fell in love with the bold color combination of the saree and the blouse. The interesting texture of the saree has made it look beyond glamorous. Sonam complemented her overall attire with black peep toes accessorising with an enchanting ear piece and beguiling ring by Suhani Pittie. The neatly tied hair bun and a subtle pink pout completed the Cannes look.

Recommended Read: 7 Ways to wear a Saree without losing your weight Sonam Kapoor wore a pink saree, during Cannes Film Festival 2015, for press junkets. She looked an absolute diva as she wore a ruffled Abu Jani Sandeep Khosla sari. The saree looked its best with the sheer laser cut blouse Sonam chose to wear with that. Sonam’s excellent choice of an ear piece with the outfit took her style quotient to a whole new level.

Sonam Kapoor has rocketed to fame with her sartorial picks and breathtaking avatars. Nonetheless, she is the real youth style icon style and has won many hearts. Sonam may have been collecting many controversies in her kitty due to her outspoken nature and films which attract a lot of critics, but we all love her for bringing India to world’s fashion map. The doting style diva has been continuously winning all her audience with her scintillating outfits. By donning the traditional outfit of a saree with a pinch of steam from the west, she has definitely taken the outfit to the whole world’s wardrobe.

Author
Rose Frank is a young enthusiastic girl who loves everything about fashion. She believes in expressing her passion in a language that everyone can connect with. She is part of the LooksGud team, which loves to reach out to maximum people and inspire them to express themselves through fashion.