The 6 yard costume has stunned designers worldwide. How could anyone wrap around a piece of fabric and yet look so graceful and so elegant! Well, it’s a mystery, but who cares? Sarees are amazing! Period! 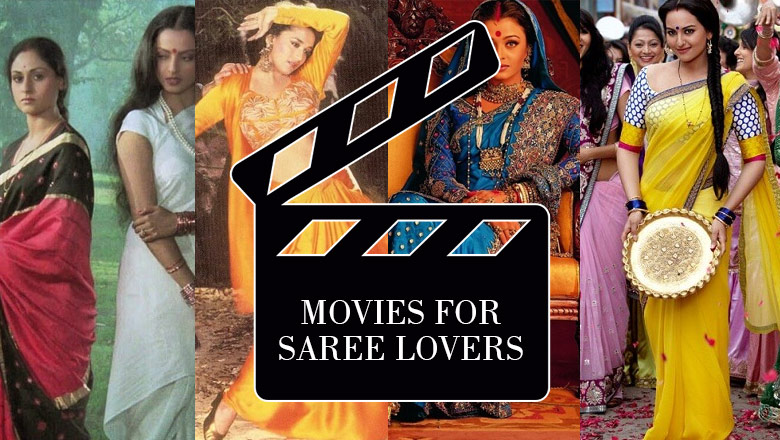 Bollywood has been able to make sarees more pertinent than ever. Whenever there was a dull phase with sarees losing out their touch from modern women, Bollywood was there to revive it. So, here is a list of Bollywood films that you should watch if you are a genuine saree lover. Mumtaz became a star overnight and so did this sexy six yard. The orange colored uniquely designed saree has been an inspiration for many designers and stylists alike. It is an iconic look that we haven’t forgotten in 50 years and we won’t in another 50. Do you know who designed the saree? It was Bhanu Athaiya, who later went on to win an Oscar for costume designing of the 1982 film Gandhi. Chiffon is a word that can describe a designing world. Chiffon made its way into Bollywood films as a representation of the new times. The flowy fabric was a perfect blend of modernity and tradition. Rekha’s each and every look was just sheer perfection. And that red chiffon! We just drool. 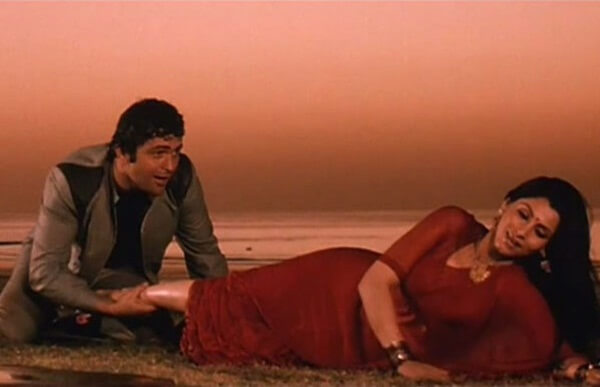 With the scintillating Jaane Do Na playing in the background, the sexy Dimple Kapadia painted the screen in crimson hues with her red chiffon and multi string blouse. 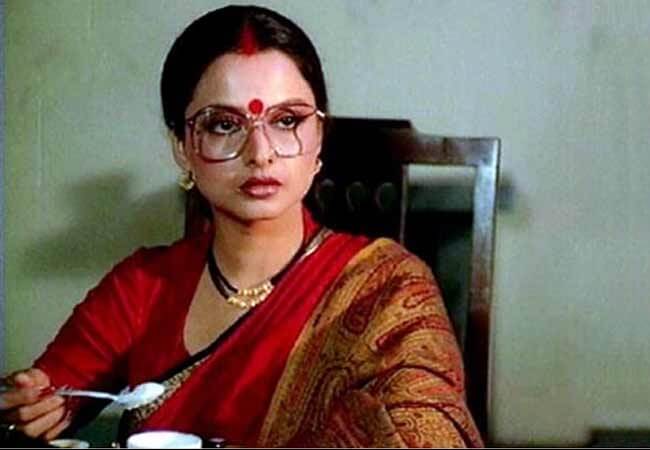 Keeping aside the soulful music the Narayan peth sarees worn by dusky beauty Rekha were a pleasure to look at. The strong storyline of Rekha’s past life in which she donned beautiful crepe silks went a long way in ensuring the movie’s box-office success. 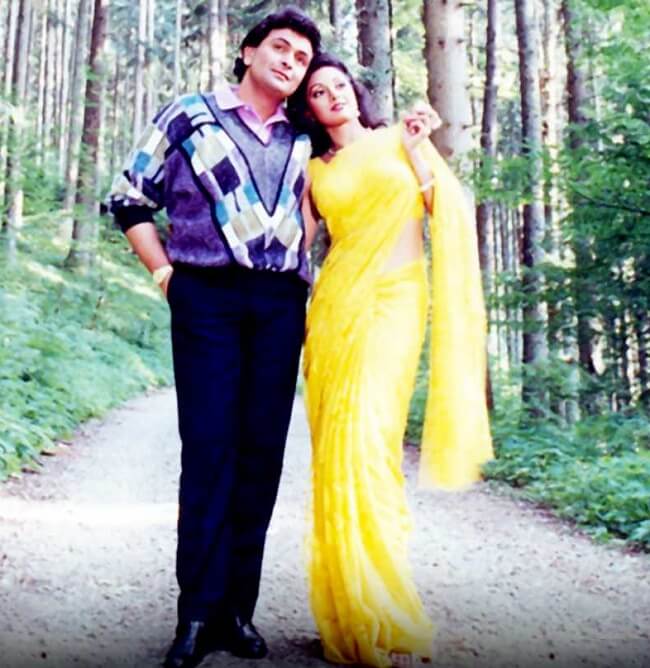 Continuing with our tryst with chiffon, here is another Yash Chopra classic. If this film is on the list, then you know exactly why it is. The yellow chiffon saree worn by Sridevi! 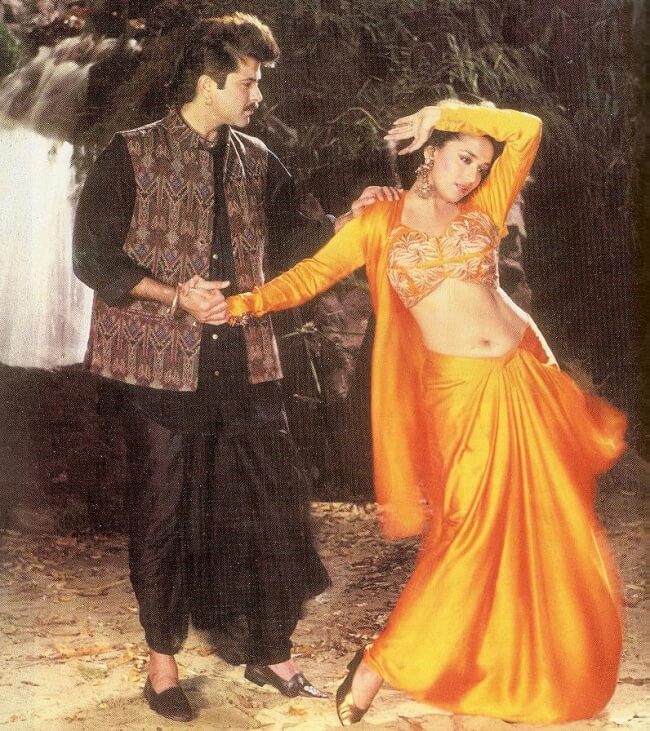 Madhuri went us go Dhak Dhak with her teasing movements and lustful saree draping in this Bollywood pot boiler. The barely there saree which provided ample viewing of her busty assets and jacket styled blouse charged up the testosterone levels of weak-kneed guys around the globe. 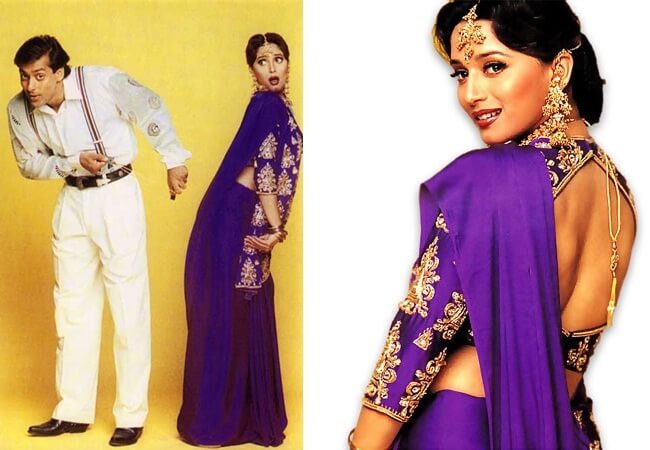 Madhuri’s Didi tera devar look had a big role to play in making this Sooraj Barjatya family drama a Bollywood blockbuster. Her crystal embellished purple satin saree teamed up with a backless choli became the style icon of a sweeping female population. 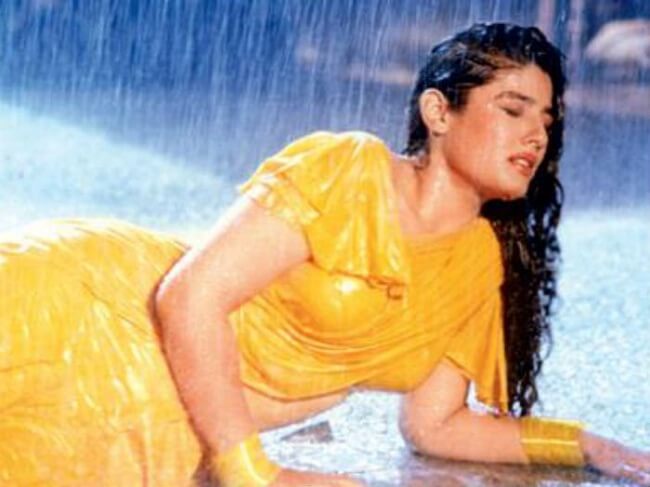 Mast Mast girl Raveena set the screen ablaze in her no holds barred portrayal of a seductress wearing a canary yellow sari grooving to the beats of Tip Tip Barsa Paani. Nothing cam sum up to the sexiness of Bollywood tomboys turning into absolute cleavage popping divas. Add to that lacy blouses with chiffon sarees and you are in for a visual treat. Veteran actress Kajol earned much praises not only for her superb acting skills but also for all the frames she graced looking like a divine goddess. Be it the pastel hued chiffons with matching blouses worn by Kajol in Suraj Hua Madham or the heavily embellished ones worn by Jaya Bachchan in the title track, Manish Malhotra took the six yards to an entirely new level with his craftsmanship. 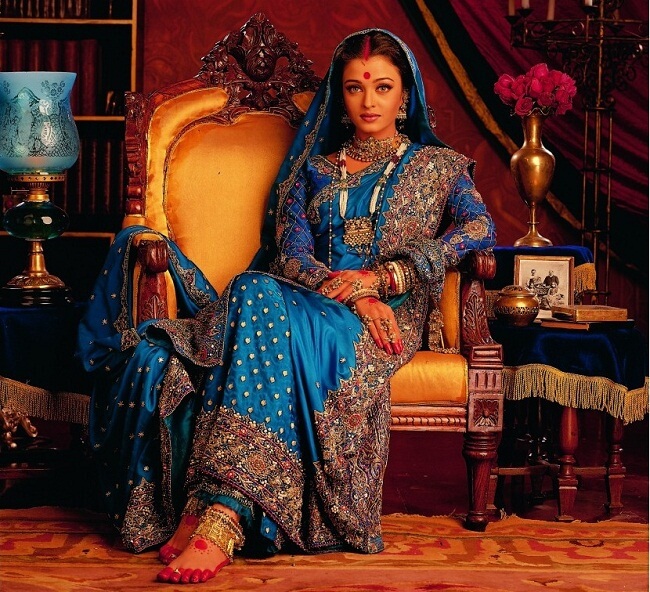 Leave it to Sanjay Leela Bhansali to make you awestruck with brilliant sets and dazzling costumes. Neeta Lulla, Abu jani and Sandeep Khosla weaved timeless magic with their costume designs. Who could forget Aishwaria’s Paro running for the last glimpse of her Deva draped in the dramatic lal paad puja Saree. “Over the top and flashy” are the two things which will come to our mind when you will think of Kareena’s Chameli wardrobe. However this eccentric combo of a flashy red saree with a floral printed blouse can be your pick for the next Bollywood retro themed party. 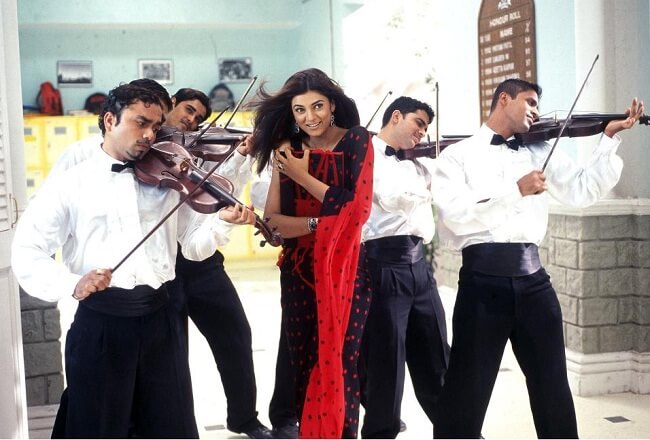 Miss Sen’s last memorable silver screen outing surely did set tongues wagging with those flowy chiffons in vibrant prints as she donned the role of a sexy yet sophisticated teacher. The soft georgettes did perfect justice to her tall frame. This musical drama made Bong girl Rani Mukherjee look like a sensuous diva with net sarees and halter neck blouses. Desi girl may be in pardes now, but she did set a new standard for sarees with Dostana. The golden sequined saree became a sensation, especially with its bikini blouse. A timeless fashion trend really did prove “all that glitters surely is gold”. 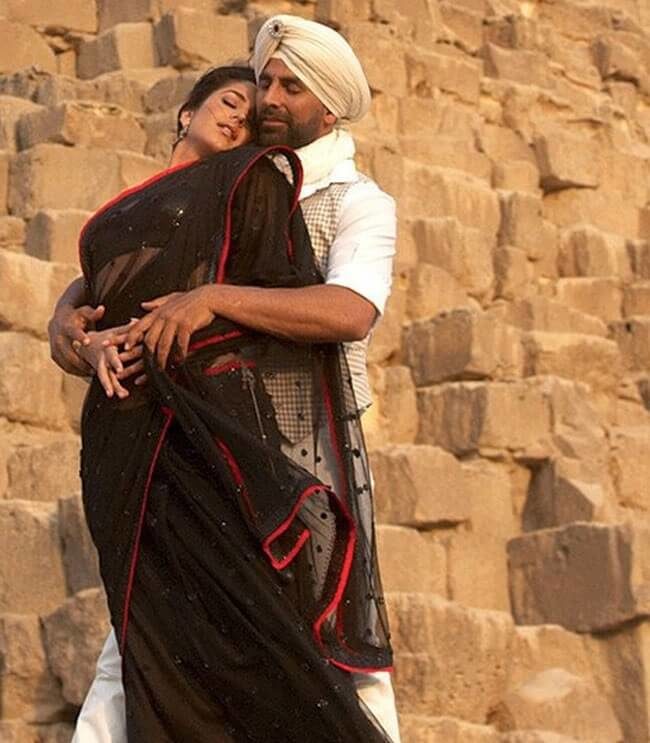 All Chameli’s and Sheila’s faded out in front of this alluring Teri Ore track which soon became the love anthem of our nation. From fuchsia pink chiffon to gorgeous black net, Katrina Kaif nailed all the looks with equal sass. 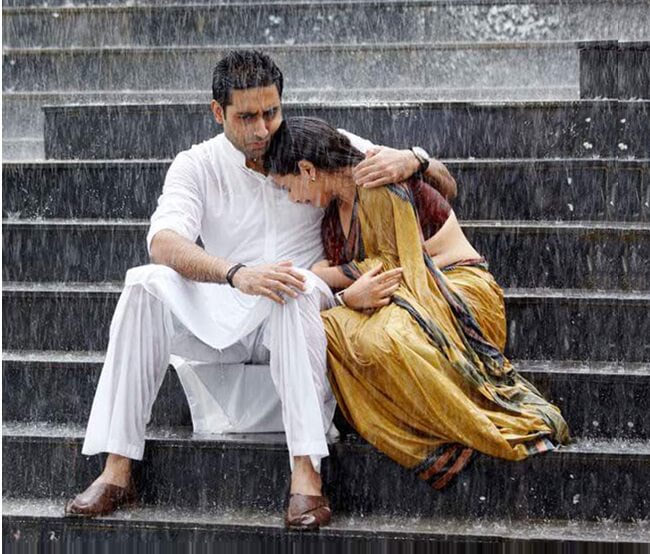 If saree can be a metaphor for an actress then that is Vidya Balan. She actually revived saree as something that can be worn at anyplace, anytime. The cotton handlooms made a comeback with Balan in this film and look at them now, cotton handlooms have become a staple in every woman’s wardrobe. 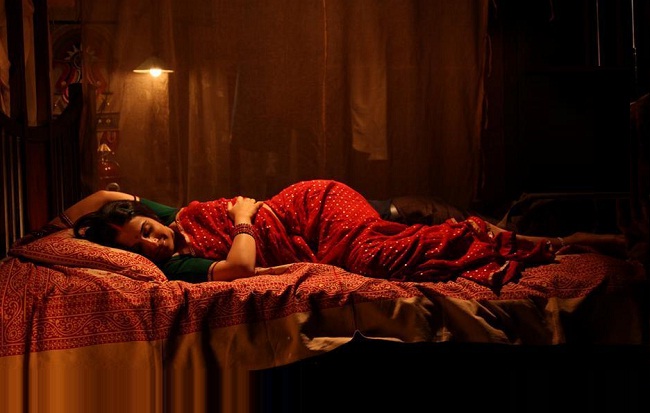 It will be a crime if we mention Paa and ignore Ishqiyaa. Only Vidya Balan can make those gawky synthetic sarees a trendsetter. When the opening credits rolled out showcasing her curvaceous outline wrapped in a sultry red saree as she laid in a tantalizing pose, her sex quotient easily topped bikini clad newbie’s of Masala movies. Sonakshi played the cool wife of a hot cop in the 2010 blockbuster. Fashion police were left mesmerized by her damsel in distress look throughout the film. Ask us to pick our favorite and we would straight go for the yellow chiffon with polka dotted crepe blouse which she donned to perfection. 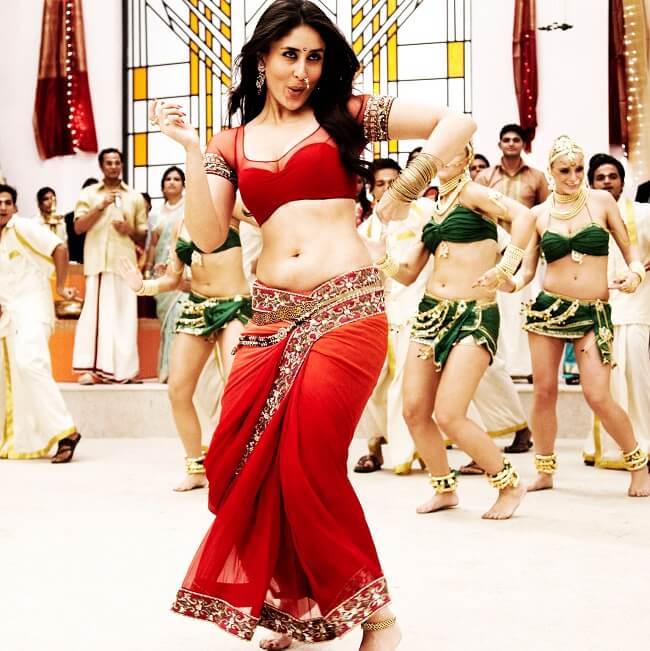 As Bebo graced the silver screen and swooned to the beats of Chammak Challo in the sexy red chiffon with sequin work and exquisite embroidery patch work we could barely take our eyes off her. 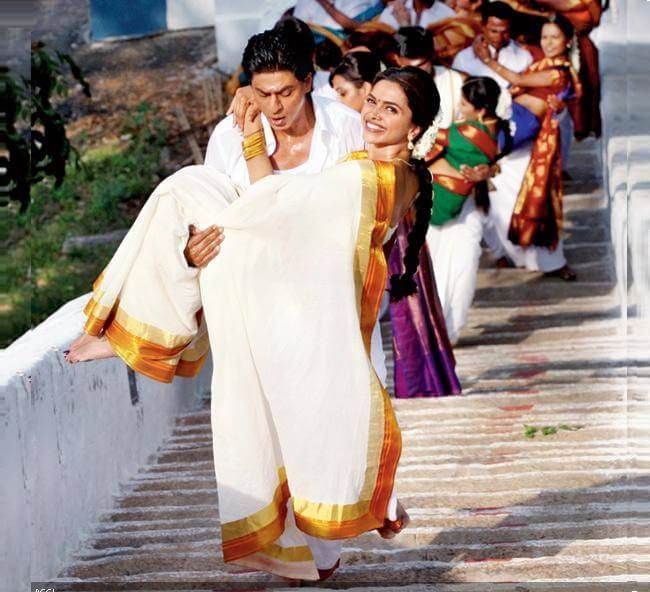 The bindaas Meenamma was spotted wearing South Indian sarees with traditional borderlines and contrast blouses – a look so simple, yet so elegant. 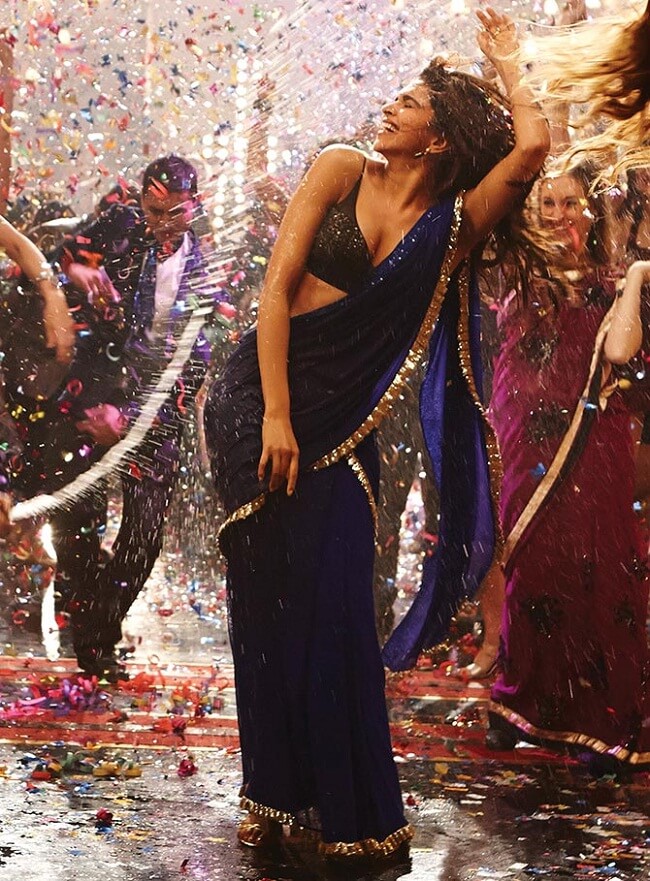 The flirty cobalt blue ensemble with gold sequins coming straight from the house of Manish Malhotra became a toast among ladies circuits. 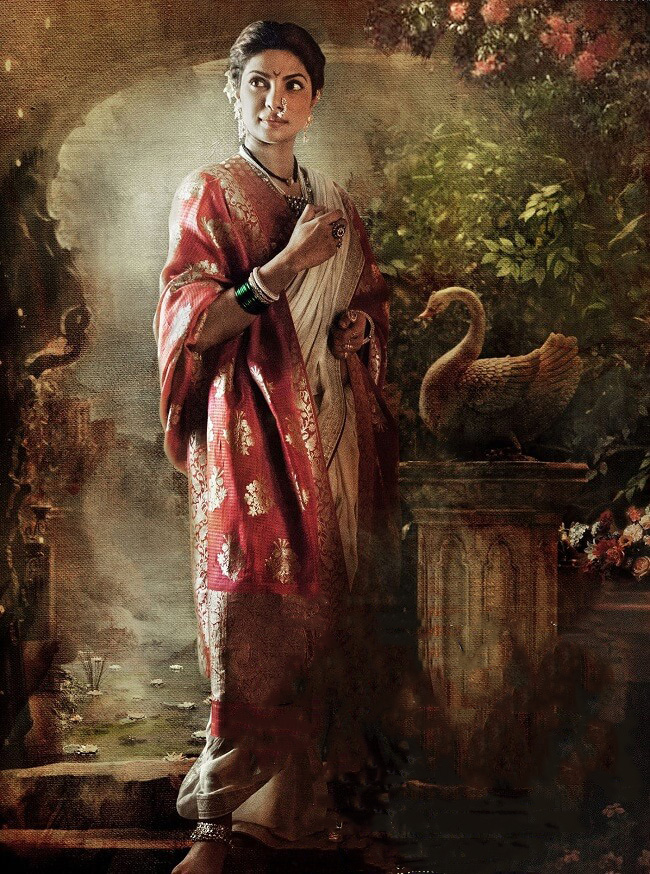 Anju Modi created such gracious pieces of lavni sarees for Kashibai that we can’t help but marvel at their beauty. The color, the designs, everything were just wow! The regal silks worn by the Mahismati ladies were delightful to look at. From the deep hued monochrome one worn by Rajmata Shivagami who paired it up with paithani and benarasi brocade silk blouses to simple south cotton sarees with khun blouses, the movie had much in store for saree lovers.

Styles shall come and styles shall go but the six yards is here to stay forever. And if we ever lose track then our Bollywood divas are very much there to again bring back the sexy sari to the forefront.

Most Selling Saree to Buy from Looksgud.in 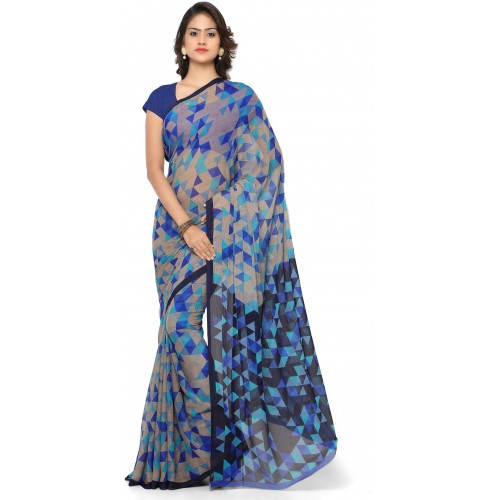 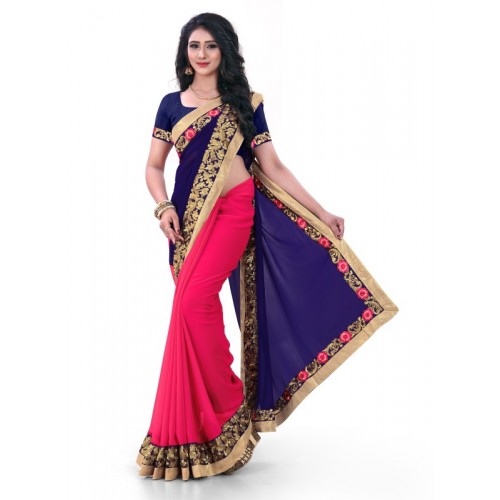